Check out my stop on the blog tour for The Legend of Akikumo by Dani Hoots! 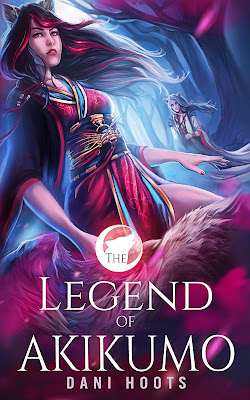 Ketsueki would give anything to find out why her mentor Akikumo, the last wolf in Japan, abandoned her. He left her with other kitsune at the Inari Shrine, but she doesn’t fit in. And now the other kitsune are bullying her and saying Akikumo is dead.

After causing trouble for the hundredth time, the Inari, instead of punishing her, has given Ketsueki a task: she must find out what happened to Akikumo. She quickly agrees, not realizing the delinquent son of the shrine’s head priest must accompany her.

Will Ketsueki be able to make peace with a human? Or will her years of resentment make this partnership impossible?

I have always been interested in stories and storytelling. I started writing stories when I was in first grade, and then by middle school I was working on novel-length books. In fact, my first book I ever finished was The Quest in high school, and then I spent most of my college undergrad rewriting, editing, taking classes on how to write.

What genres do you prefer to write in?

Honestly, I like writing in a lot different genres. I write YA, fantasy, and science fiction mostly, but have dabbled in romance and suspense.

Are there any authors you prefer to read and why?

I love reading my friends’ novels of course, and a lot of the YA authors in the Phoenix area. Some of my favorites to read though are Joanna Ruth Meyer, Timothy Zahn, and Richelle Mead.

How did you make the move into being a published author?

I decided this is a job I wanted, so I worked hard at learning to write and started researching marketing, learning about the industry, and then went the self-pub route and haven’t looked back.

Having a reader message or email me how much they loved my work is always very rewarding. Sometimes they will tell me how they stumbled on my work, and that is always fun. I also went to school with someone whose daughter was a big fan, which felt great.

Hitting publish. I always worry of how my book will be received and whether what I think is a fun story will be for them.

Do you have any tips for writers who find themselves experiencing writer’s block?

Just keep writing. You can edit later. I always write the entire book all the way through and if I need to change something earlier, I make a note, but going back and editing is what causes a lot of writer’s blocks. Just keep going!

What advice would you give to people that want to enter the field?

As Uncle always said in Jackie Chan Adventures, “we must do research!” Research is key. Understand the market, understand how to market, understand the different avenues and make friends. Keyword there is friends, not just networking, but make lasting relationships that aren’t for your own gain or you will get nowhere. Bookbub has great tips for authors and I highly recommend their blog.

I mainly want readers to find an escape, and to learn something. I do a lot of research for my books, and try to base it on actual legend or mythological gods/creatures so I hope they will peak the interest of people and they will go learn more about cultures. I have a degree in anthropology and herbal science, so I really like adding those aspects.

Is there anything else about you that you think readers might find interesting?

I love cooking and anime, and also have my own apothecary online called Foxcraft Apothecary where I sell teas and other herbal products.

About the Author
Dani Hoots is a science fiction, fantasy, romance, and young adult author who loves anything with a story. She has a B.S. in Anthropology, a Masters of Urban and Environmental Planning, a Certificate in Novel Writing from Arizona State University, and a BS in Herbal Science from Bastyr University.
Currently she is working on a YA urban fantasy series called Daughter of Hades, a YA urban fantasy series called The Wonderland Chronicles, a historic fantasy vampire series called A World of Vampires, and a YA sci-fi series called Sanshlian Series. She has also started up an indie publishing company called FoxTales Press. She also works with Anthill Studios in creating comics through Antik Comics.
Her hobbies include reading, watching anime, cooking, studying different languages, wire walking, hula hoop, and working with plants. She is also an herbalist and sells her concoctions on FoxCraft Apothecary. She lives in Phoenix with her husband and visits Seattle often.
Website: https://www.danihoots.com/
Twitter: https://www.twitter.com.danihootsauthor/
Facebook: https://www.facebook.com/danihoosauthor
Instagram: https://www.instagram.com/danihootsauthor
GIVEAWAY: